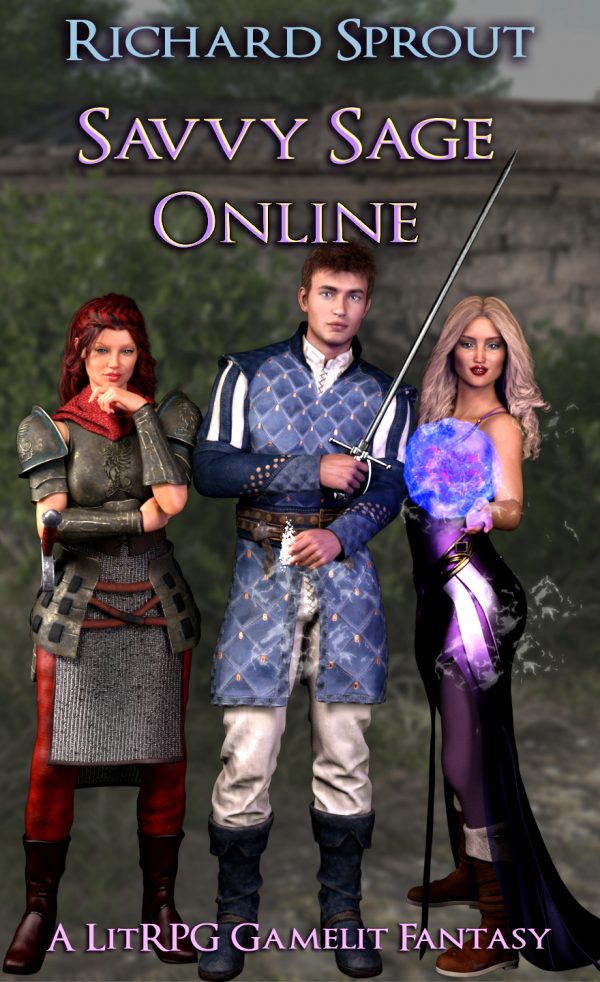 Join a fantasy game. Make friends (and more) with hot women. Oh, and try not to die.

​A first person LitRPG Gamelit Fantasy novel, Savvy Sage Online tells the story of how Nate, a twenty something guy ended up a beta tester for a next generation game system. While inside, he tries to build relationships while avoiding evil sorcerers, deadly monsters and learning how to creatively apply his new magical skills in interesting ways.

Once inside the game world, Nate quickly makes friends, first with Roger and then Jenny, a plucky warrior redhead who saves him from becoming cat food. After that, Nate meets Alice, a mage working tables to save for guild dues. When Alice gives Nate a Request, Nate dives deep into making her fantasy, and his, come true.

Together, the three fight monsters, dive into a dangerous dungeon, learn innovative magical techniques and plot to create a new place of learning for the curious. Debut novel from Richard Sprout, Savvy Sage Online is an original story over 124,000 words in length.

Pick up this binge-worthy tale today!

If you’ve already enjoyed the tale, join our mailing list and get an exclusive from the new book due out September 17th, 2020.

Excerpt from the first chapter below:

When I was growing up, the idea of Virtual Reality enthralled me. However, as a teenager, the systems available had been a disappointment with the immersion limited to sight and sound. Touch, sometimes, but fleeting and not very realistic. No mention of taste or smell, a terrible omission that technology took a long time to address. Smell was the foundation of memory, as countless experiments with ants had proven.

Despite the lack, I had been very interested in the technology and followed fresh developments with a keen interest.

Even volunteering in helping a small company develop the world’s first Penis Emulation Engine for Integrated Satisfaction, which we called the P.E.eN.I.S. system. The only way to invent such a device is to be a genius with electronics, computer engineering and have zero social life. That was the value add of the company, of course. What did I bring to the table? A lack of fear I’d end up electrocuting something sensitive for a relatively small paycheck. With the economy the way it was, no wonder I ended up being a guinea pig. It beat going homeless.

You do not understand how many times I had a close call on our way to that eureka moment we’d sought.

After scoring a patent for the P.E.eN.I.S. system and selling off the technology, I watched as the new company announced they would integrate the tech into their next generation virtual environment game. The company acquiring P.E.eN.I.S Systems, Inc (of which they also paid me a slight amount in stock options) ended up paying me sizable amount once those converted to cash. Little did I know that experience being a lab

rat would eventually be the reason I got to beta test their latest full immersion game innovation, code named Phoenix Online.
In search of a specialist beta tester, the gaming corporation Phoenix Online tracked me down. I was curious about how their new system would feel, and what kind of experience it would be, especially since they had integrated the tech I helped develop and promised every sense would be filled, providing the world’s first perfect immersion.

Unfortunately, getting into the game involved some situations so dangerous that, if I had known from the start, I might have made perhaps a different choice. I might have declined and then, well, who knows where life would have taken me?

Still, with the social skills I had, games were the only way I had of interacting with the world that made me feel comfortable. If I had a girlfriend, maybe things would be different. However, every time I thought about signing up for one of those dating websites, or thought about the cute woman down the hall in my condominium building, I got cold feet and chickened out.

Thanks for checking out my writing! As a fan of harem fantasy stories for years, I decided to start creating my own works. I have a few different ideas I'm currently working on and Savvy Sage Online is just the beginning.

If you haven't signed up for the newsletter jump on it now, as I'll have preview chapters of the next Savvy Sage Online available in July.