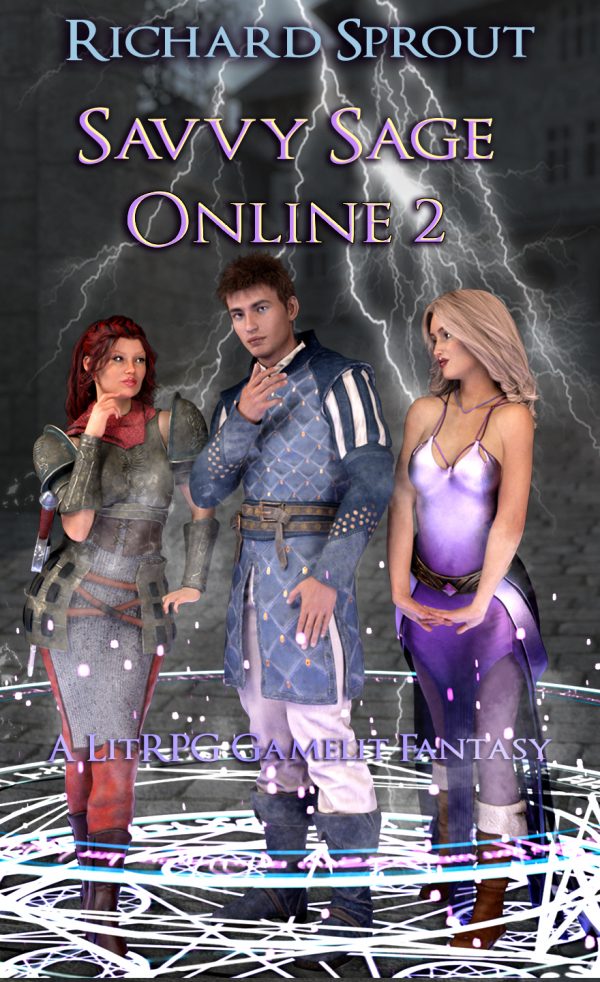 Nate joined a fantasy game for what was supposed to be a one week beta test. He made friends. Survived enemies. Learned secrets.

Now, he’s got another six and a half months left before his time is up and to survive, he’ll need to continue growing his skills, learning magic, and deepening the relationships he has with Alice, Jenny and the key players in the city of Freedom. For while an army of barbarians lies to the north, trouble is brewing close to home.

When the fallout from foiling the plots of Encantantes, the sorcerers guild, unfolds, Gawain summons the group to the city. There, the team must prove their loyalty and in doing so, exposes a plot to destroy the kingdom.

If Nate can survive the dangers in the city, and elsewhere, build a relationship with the ruling city of Freedom, and establish the village of Nexus, it’s not just monetary rewards that await. Alice, and Jenny, are growing closer with each other and Jenny seems like she’s interested. Sequel to Savvy Sage Online, this second book in the series will is over 124,000 words, a bit longer than the first book.

Order this binge-worthy tale today! Already did? Join our free newsletter for a sneak preview soon.

Excerpt from the book:

Building a bed frame from scratch was simple enough once I got into the process. The logs took time to smooth into planes and then I split the new boards into the right sizes. While I lost myself in the work, I tried to ignore any thoughts about what else was happening inside the house. The project was my way of doing something productive, instead of fantasizing, and that’s what I stuck to doing.

First thing I did once the various planks were setup in their new pieces was to join them together to see if the whole thing would work. My crafting skill was useful as the bed did not rock, or make any extra sounds when I pushed against the newly crafted frame. Satisfied with this stage of the crafting, I started in on the next and began smoothing down the wood. The last thing I wanted to do was get a splinter or worse rolling over in the morning.

Grinning to myself as I worked, I got sweaty in the workshop after a while and then I went to roll up the new door. The front was a pulley system that moved slats of thin metal, which sat behind a wall that broke apart. With the way the front of the workshop folded and then lifted out of the way, a full wagon could easily come inside, unload, and then a second could pull in and start doing the same parked next to the first. I might eventually want a larger workshop, but that would have to wait until other things were taken care of by the three of us.

“Work,” I sang to myself, “More work to do. Just gotta push on through.” I rested against the bed frame and took a long drink from a waterskin, wondering if I should practice my cooking skills. Then thinking if I was going to, where I’d fit it into my schedule. I figured, even with myself and my clone helper making the bed, I should really get a team together on the pasture for the cows and coop for chickens. The pigs I would settle into a pen. I started casting my clone spell once again to create the teams that would do all the work.

Get the book here on Amazon.

Thanks for checking out my writing! As a fan of harem fantasy stories for years, I decided to start creating my own works. I have a few different ideas I'm currently working on and Savvy Sage Online is just the beginning.

If you haven't signed up for the newsletter jump on it now, as I'll have preview chapters of the next Savvy Sage Online available in July.